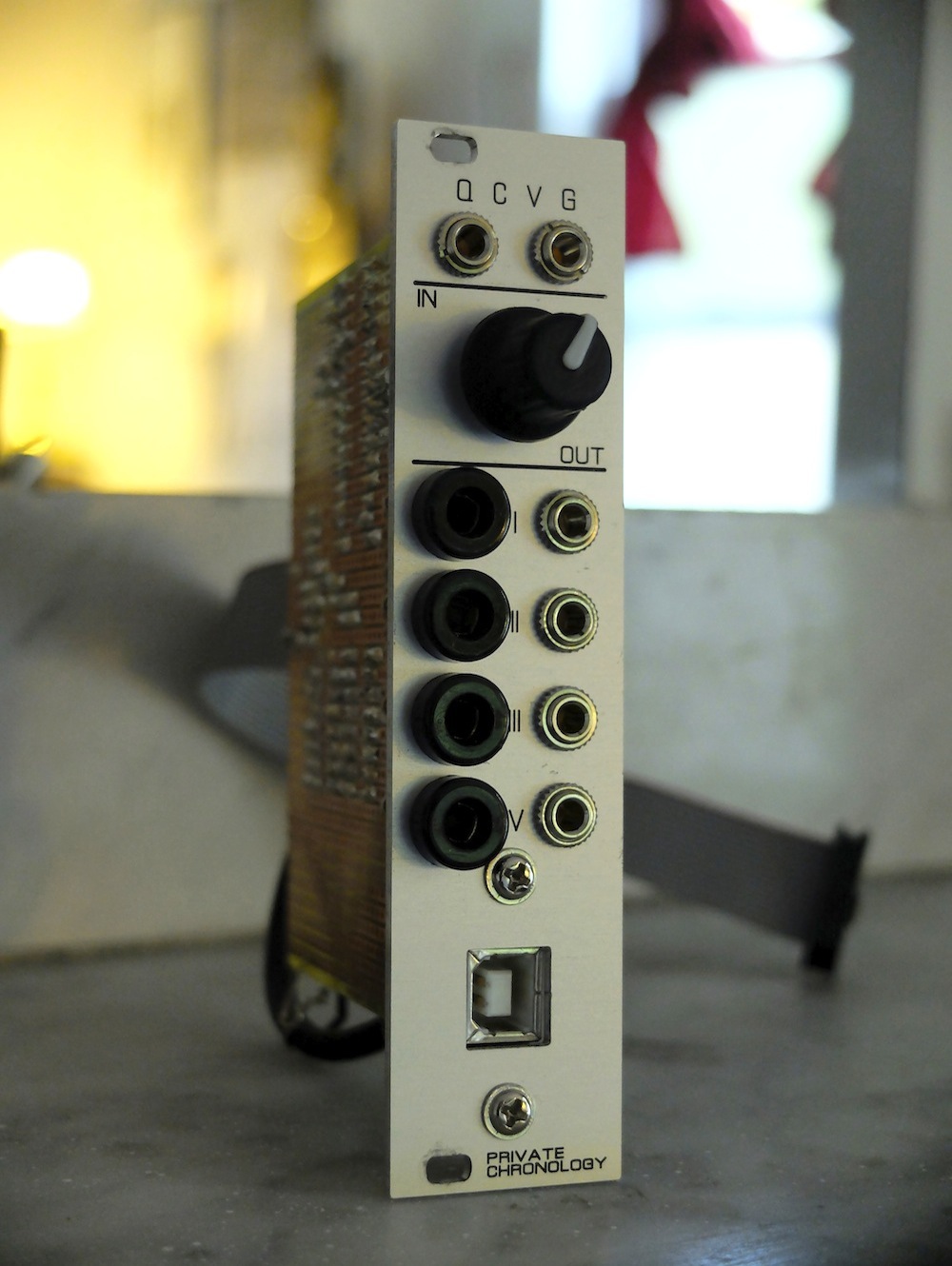 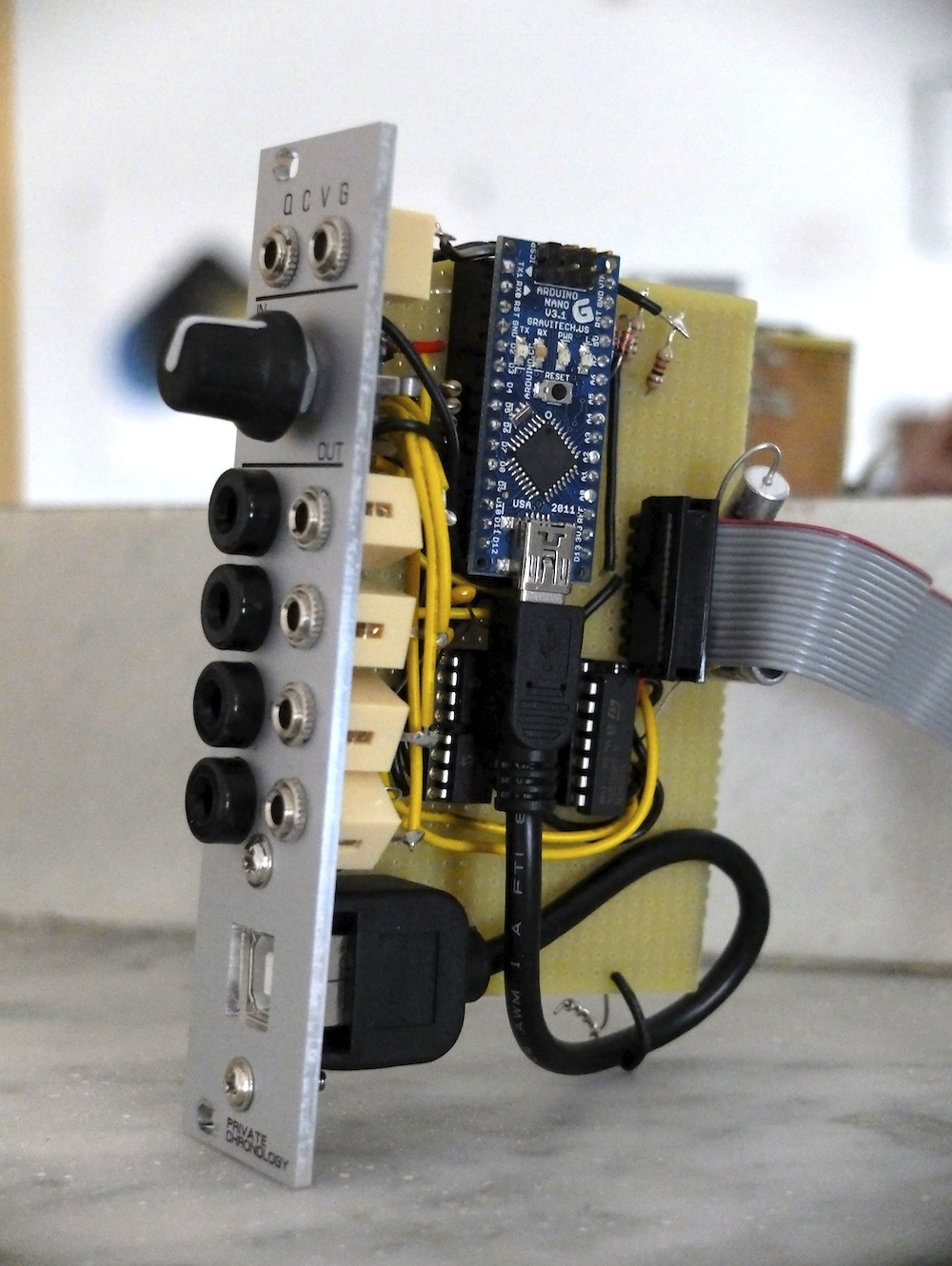 Side view of the QCVG prototype 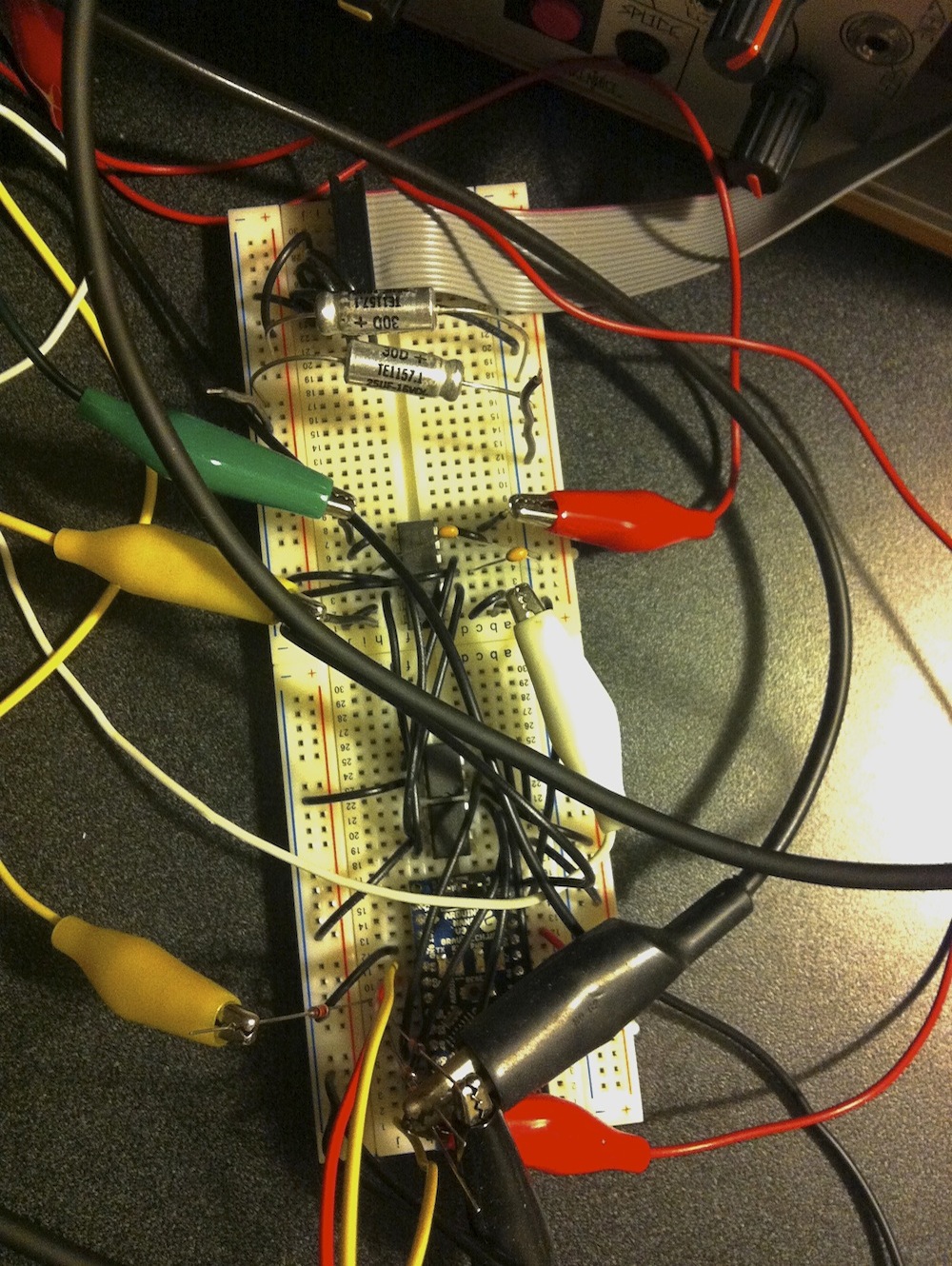 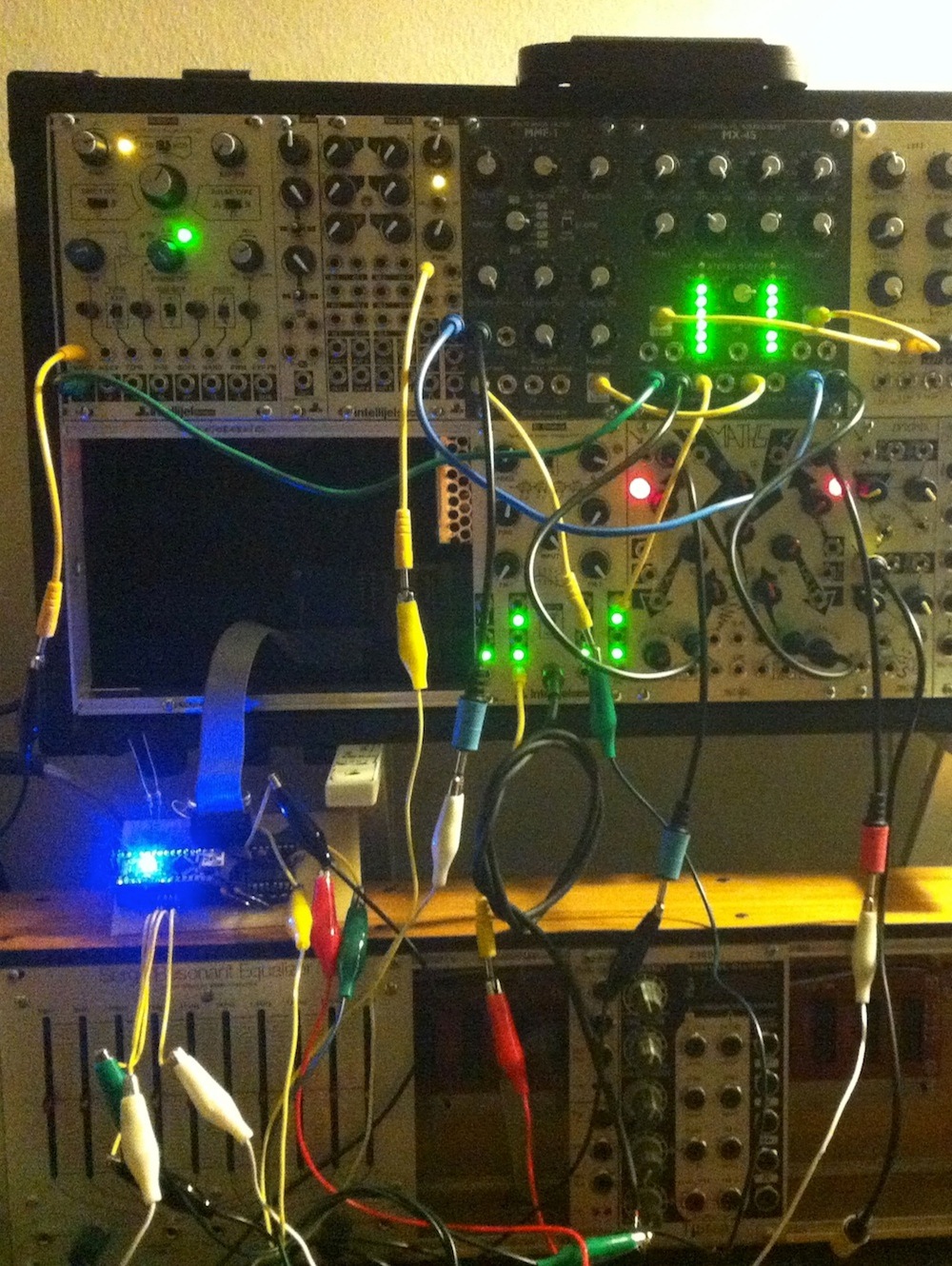 ... Circuit testing of the stripboard prototype in progress ... 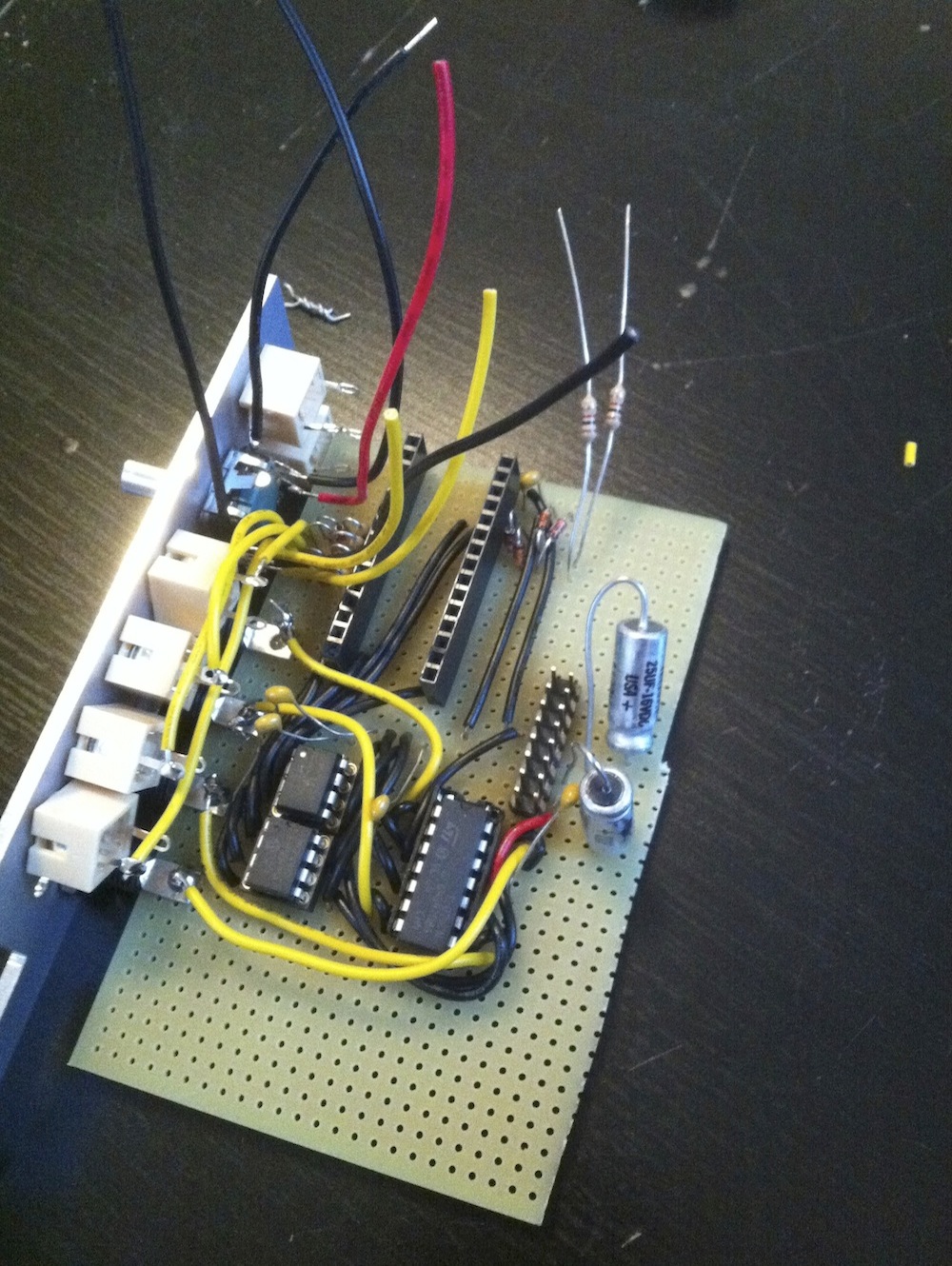 The QCVG is an Arduino-based, algorithmic, four-channel CV (control voltage) and trigger generator. Although flexibility in its design allows the QCVG to serve a number of open-ended functions, it has been developed primarily to operate as the brain and control center of a modular synthesizer system.

A stripboard prototype of the QCVG was designed, soldered, and assembled in the spring of 2013. It incorporates an Arduino Nano interfaced to a pair of dual 12-bit DAC chips (MCP4822), with each channel providing 0-4 volts (four octaves) of CV with millivolt precision. The trigger outputs are derived from the digital outputs of the Arduino, and are intended for triggering envelopes and syncing clocks.

The software library is still in progress, with an emphasis on developing functionality beyond conventional analog operations, for example:


The current prototype features a very reduced interface (taking up only 6 HP of eurorack real estate), with only a push-switch rotary encoder and two analog inputs. However, the production model may end up with more with a more developed interface with greater means for real-time control by the user.

There is currently no production timeline for this module. However, if you are interested in purchasing a unit down the line, feel free to email me at private-chronology@gmail.com with the subject heading, 'QCVG Production Inquiry'.

Private Chronology is a small experimental music label run by Reuben Son. The label is currently in hiberation.

For international orders and other inquiries, email private-chronology a.t. gmail.com